The January-February Spotlight was written by Emilio Murga, who chaired the 4th Annual Student Leadership Summit, which was hosted by Cal State Fullerton. Annually, the Student Endowment Fund provides $1000 in funding to support the SLS. The following are Emilio’s thoughts on the SLS and Endowment Fund:

It’s been a couple of weeks since the 4th Annual ITE Western District Student Leadership Summit (SLS) at California State University, Fullerton (CSUF), which took place January 13-15, 2017. It was nothing short of a great time and by every measure a huge success. Peppered throughout this summary are the many familiar names of those who spoke, participated, and volunteered during the weekend. They played a huge role in the success of the event and we cannot thank them enough. The goal for this SLS from the beginning was to have more students and professionals than any other SLS with attendance from the closest and furthest reaches of the Western District. Our goal as hosts, was to grow a larger chapter with the same passion passed on since beginning in 2012, as well as influence the Civil Engineering department to add more transportation courses to the curriculum.

When we were awarded the SLS in April of 2016, we were mostly excited to bring that ITE Western District energy to our peers on campus. We set our sights high—we sought to attract many devoted transportation students and professionals to an event that provides insight to the perplexing Southern California driving culture that has historically and overwhelmingly preferred freeways to mass transit. As the biggest SLS yet, we required a big budget. We began our fundraising last summer before heading to the Western District Meeting in Albuquerque, NM. In Albuquerque, we promoted, met potential speakers, and potential sponsors. Our promotional campaign continued at the International Meeting, conveniently located in neighboring Anaheim, CA. We continued throughout autumn as we went to every SoCalITE, RSBITE, and OCTEC event to continue connecting with students, professionals, and sponsors.

The stressful months of intricate preparation paid off as students arrived on Friday afternoon and stepped into the first major event, the ‘Company Meet and Greet.’ From afar, this opening event resembled a career fair, but up close it was a stress-free opportunity to connect students and representatives from numerous companies and agencies. Students learned about the firms and agencies, opportunities available, and what experiences would make students most valuable. Next, we enjoyed a fabulous buffet dinner and listened to speakers Neelam Dorman and Shawn Leight. The night closed with an introduction to the weekend-long group project and the randomly assigned student groups named after famous Southern California freeways, interchanges, and passes. 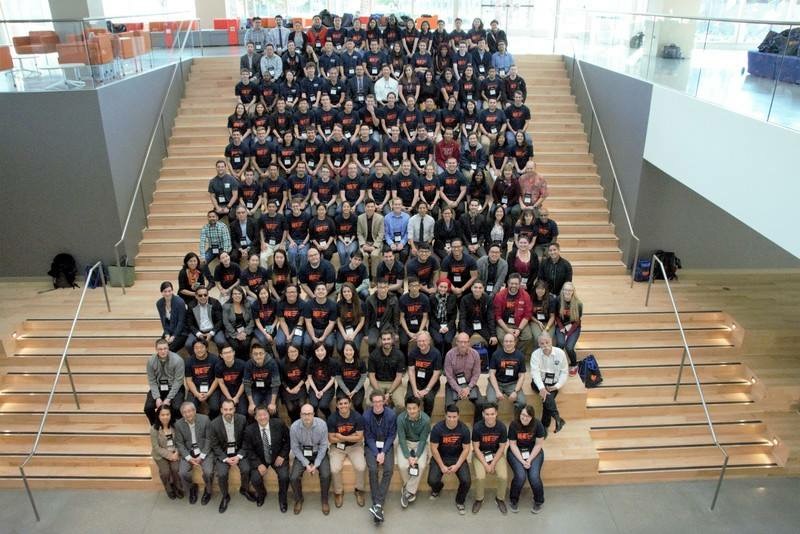 Saturday started early with technical presentations from Monica Suter, RailPros, Walter Okistu, Rock Miller, LA Metro, and California Highspeed Rail. An hour-long ITS panel followed with panelists Carlos Ortiz, John Lower, Randy Durrenberger, and Dennis Ralls. Zaki Mustafa and his wife, Loraine, prepared a magnificent barbecue lunch served by Ken Ackeret, Bruce Belmore, Shawn Leight, and other ITE professionals. Zaki gave his customary post-lunch address right before we took the massive SLS photo. Before things could settle down, the speed interviews kicked off. More than fifty professionals volunteered to help students get over those first jitters. The speed interviews were broken up into segments with alternating student groups. While one half was getting past typical interview questions, the other group was working on their group projects with help from Bruce Belmore, Josh McNeill, and Shawn Leight. There was a break afterwards to prepare for the bountiful banquet in the evening at the Fullerton Marriott where Ken Ackeret and Jessica Meany spoke, students danced, and everyone hopped into the photo booth.

Sunday began early too, with the whole morning devoted to last day of the competitions for the best group project. Fourteen student groups assembled into community action groups to present advertisements to a jury of more than a dozen professionals. The students had been assigned to be in-favor or opposed to a fictional development at CSUF that would create a stronger campus community, but would have major traffic implications for nearby neighborhoods. Four teams proceeded to the semifinals where they gave a public address at a mock town hall meeting. Afterward, the final two teams pled their case at a mock city council meeting with council members Eric Shen, Bruce Belmore, Dave Roseman, Shawn Leight, and seven-term incumbent mayor Mark Spencer. The council ultimately decided to wait to make a final decision on an unspecified future date, which meant that the opposed community group had prevailed. Mark Spencer and Dave Roseman gave the closing remarks before students went off with their boxed lunches to one of two options for technical tours. Students could choose between the Monrovia Station and neighboring LA Metro Maintenance and Operations Yard hosted by Jonathan Hofert; or a tour of the Anaheim Traffic Management Center (TMC) and Anaheim Regional Transportation Intermodal Center (ARTIC) hosted by several engineers from the City of Anaheim.

During a short break, Neelam Dorman asked “would I do it again if I could go back?” The answer still remains true, even a few weeks later, “Absolutely!” The SLS is the most spectacular and important event our chapter has ever organized, hosted, and participated in. It has introduced us to so many amazing people and organizations, and created a deeper connection into the fabric of ITE. Many student volunteers that had never attended an ITE event off campus now asked about upcoming section and district meetings. The chair of our department was floored by the attendance and participation from the ITE community. I am confident that there will be new transportation classes being added to the course schedule in coming semesters. We owe so much to the Student Endowment Fund and the Western District for their never-ending support, generosity, and graciousness. There will never be sufficient words to properly thank them for all their help specific to this SLS and for creating such a rich network that makes it so easy for students to become stronger leaders and become more focused on their careers.